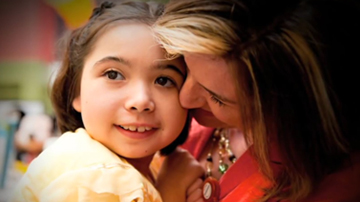 “Never doubt that a small group of thoughtful, committed citizens can change the world; indeed, it’s the only thing that ever has.” – Margaret Mead

Parents often feel helpless when a medical professional gives their child’s condition a poor prognosis. But what these loved ones may lack in medical know-how, they make up for in unshakable determination. Together, with innovative experts in the medical fields, we can fight our way through conditions once thought incurable.

Like so many others, Audra and James Small remember exactly what it felt like when doctors initially gave daughter, Sophia, the bleak diagnosis. Audra chokes up when she thinks about it, “When they said that she had Rett Syndrome, you would have thought someone had come in the room to tell us they were taking our child away. They said they were ‘sorry’ – they were ‘so sorry.’ And they handed me this purple book and said, ‘She really won’t be able to feed herself, she won’t be able to be on her own. You need to start thinking things differently for her life.’” It seemed as if Sophia was being served a life sentence to which there was no hope or chance for improvement.  “I think we just kinda left there in a state of disbelief and a hurt that you can’t imagine,” James said. Fortunately, while the Smalls may not be doctors, they knew there had to be more that could be done. “I came home and there wasn’t really anything I could work on because they said it was incurable,” James continued, “And I don’t work well with incurable, it doesn’t fit well with my personality. I wanted to solve the problem.” After that day, Jim and Audra’s primary focus shifted to funding medical research so a groundbreaking solution for this devastating syndrome could be found.

While it may seem farfetched at first, determined parents and loved ones have had an undeniably important impact on the course of medical history. In fact, their emotional attachment is often what allows them to remain unflappable and unyielding in the face of “hopeless” conditions. Like when Robert and Sherry Graves’s 10-year-old daughter Laura was diagnosed with leukemia.  Willing to go to any lengths to save their daughter, they began researching alternative treatment options. In 1979, Laura underwent the first-ever bone marrow transplant from an unrelated donor. The Graves’s prayers were answered, and the operation was a success. But their fight wasn’t over, they wanted other families to have access to the same procedure that provided their daughter with a new lease on life. And so, with the help of medical professionals and donations from loved ones and strangers alike, they were able to create a national registry of volunteers willing to donate bone marrow. And thus, in 1987, the National Marrow Donor Program® was born. Thanks to the actions of Laura’s parents, the organization has grown to facilitate over 92,000 blood stem cell transplants, and nearly 6,200 transplants a year.

In 2016, another parent turned desperation into innovation. When Ben Ryan’s son, Sol, was born with a blood clot in his left arm, Ben and his wife were forced to make the heartbreaking decision to amputate the 10-day-old’s arm. Causing further frustration, they were told by the United Kingdom’s National Health Service that Sol would not be issued a prosthetic arm for at least a year. Not only would there be a wait but, for children under 3, standard prosthetics are often rigid with zero hand movement. Ben knew a better solution would have to be found, and he would have to be the one to find it.

A former psychology teacher with absolutely no background in engineering, Ben had zero experience with the world of prosthetics. However, knowing he was the only hope his son had at a better way of life, he immersed himself in the mechanics of bionic arms and the increasingly accessible use of 3D printing. Ben used an Xbox scanner to create digital scans of his son’s residual limb, which he then used to 3D print the socket. Eventually, after some trial and error, he came up with a basic design that would be sturdy enough to withstand a tantrum while also allowing his son to grip things. His work proved 3D-printed bionic arms could allow a child to have a custom-fitted arm in under a week — a vast improvement from the rigid limbs with the year-long wait. Not only that, he accomplished the feat for less than $250 — FAR below the normal cost to families. Hoping his innovation could help others avoid the long wait and expense, he founded AMBIONICS. The prosthetic company’s mission was simple: by finding ways to provide greater functionality, outcomes can improve, which leads to a better quality of life for all. In 2018, Ambionics laid the groundwork to open free clinics in South America so they can have an immediate impact while they continue the process of developing a franchise for private clinics in the United States and Europe.

And so, like every other persistent parent who refused to give up hope, James and Audra Small created Rett Eliminated Together Today (RETT), will stop at nothing to find a way to give girls like their daughter, Sophia, a better quality of life.  And there’s hope; Rett Syndrome has stood apart from other neurological disorders due to a dramatic new gene therapy treatment that has reversed the symptoms of Rett Syndrome in animal subjects.

Join us in the fight! Help RETT continue to fund the cutting-edge research necessary to make a cure accessible to each and every one of the 350,000 girls and their families living with this disorder. With your support we CAN create a world without Rett Syndrome.